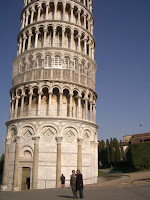 Have you ever seen the leaning tower of Pisa in person? I had the privilege of going on a pilgrimage to Italy a few years back. One of the cities I visited was Pisa. I journaled the whole time I was there. Here is an excerpt from that day. I recommend journaling whenever you travel or even on a daily basis. Not only might you use some of your comments in a story someday, but you've also captured the essence of the moment. I am on the right at the bottom of the picture. My friend is standing beside me.
March 13: We arrived in Pisa. As soon as I saw the leaning tower of Pisa, I was amazed at how much smaller it really was. It wasn’t as tall as I imagined. But, boy, was it leaning. Then our priest pointed out the domed baptistry next to it. Awesome.
Lunch was at a local restaurant. I had some kind of soup that was rather bland and without color but I was hungry so I ate it. The owner was loud and impatient. If you ordered water, they brought you bottled water and charged you for it. They didn’t put water on the table. After lunch, I bought some postcards at a small stand outside. My friend and I strolled along the sort of flea market on the road opposite the tower. So many vendors. So many tourists.
After lunch, we had Mass in the basilica next to the Pisa tower. We went in through a side door to avoid the crowd. We sang before Mass and our voices resonated in the openness of the basilica. Basilicas in Italy have several altars for different Masses at different times. The ceiling of the church was so high and it was cold inside. I kept glancing at the old-fashioned confessionals on the side of the pews. They were ornately carved of rich, dark wood. The wooden pews were hard as were the benches. My knees hurt whenever we knelt.
I felt overwhelmed by the splendor of the renaissance art on the ceiling and the statues on the walls. The communion railing was made out of white marble. We took communion but didn’t kneel at the railing like in the old days. We lined up instead. It felt almost like a mausoleum; it was so big. We walked around in hushed tones. Then we walked back to the bus and started our journey to Florence praying a rosary on the way enjoying the pleasant weather and the green rolling hills of the Italian countryside.
Posted by Lupe Ruiz-Flores at 12:51 PM