Yesterday I was on a school visit to Reilly Elementary in Austin. It was a delightful one. Two fourth-grade ambassadors, Alisa and Anna, greeted me at the entrance to the school and escorted me to the office and to the library. The fourth graders and their teachers went to a lot of trouble to make my visit memorable. They constructed welcome signs and even made a raspa stand complete with paper snow cones and papel picado for my reading of The Battle of the Snow Cones. 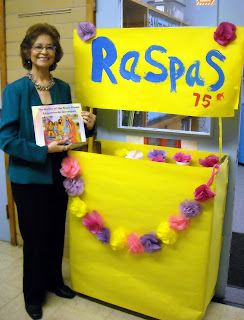 After the reading, we did a brief writing exercise, which turned out to be a lot of fun. We talked about the writing and the illustration process as well. The enthusiastic students asked really great questions of the author. So did some of the teachers. My objective was to show students that books are magical and fun. I hope I inspired them to read and write more.

I am always amazed at how much work the librarians put in to make their school libraries so inviting and cozy. Had I not had to get back home, I would have loved to just relax with a book or two in that lovely library. Hats off to the librarian, Ms. Camacho. The school visit was a great way to start off the year. 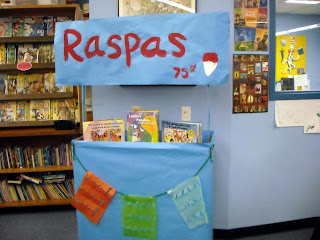 "I hope to say to all children that they are special ... that all of us are special ... important just because we are ourselves." -- Patricia Reilly Giff
Posted by Lupe Ruiz-Flores at 12:45 PM 2 comments:

﻿
﻿﻿ ﻿﻿What a great way to start the year! I just received via email the black and white sketches for my next bilingual picture book, Alicia’s Aguas Frescas/Alicia’s Frothy Drinks. The illustrator, Laura Lacamara, has done a great job bringing the characters in my story to life. I think it’s going to be a fun book that all kids as well as adults will like. This is all part of the journey of the book. Pretty soon I will be shown the sketches in color! Then the galleys. Then the finished product sometime in the spring. As I’ve said before, a picture book is a collaboration, a team effort, between the writer and illustrator and publisher. It becomes “our” book when it’s finished.
On the topic of manuscripts, are you about ready to pitch or query the story you’ve been working on to an editor or an agent? Has it been critiqued and polished and is ready to go? So where do you go from here. When I first started, I had so many questions and knew so little. I’m still learning about this business. I came across a blog article by Janet Reid, literary agent, on “ … the difference between pitch and query.” Visit her blog to learn more on this. Be ready. Submit. And best of luck.
“If you doodle enough, the characters begin to take over themselves — after a year and a half or so.” – Theodor Geisel (Dr. Seuss)
Posted by Lupe Ruiz-Flores at 9:36 PM No comments:

Self promote your book

Yesterday I was on a panel for our local chapter. The topic: learning tips and tricks to market your book through online and traditional methods. There were four of us on the panel, three writers and one illustrator.
As we all know, with diminishing budgets, most publishers want authors and illustrators to do most of the promotion of their books. Some tips:
Promote your book on your Website, Facebook, and Twitter. Contact bookstores and libraries for booksignings. Network at writers’ conferences and at book festivals. I’ve gotten many an invitation for school visits and speaking engagements at these events. Always have with you promotional material for your book, i.e., brochures, postcards, business cards. The objective is to get your book out there in the public eye. Even if your book is not out yet, prepare and be ready for when it is published. It will make a big difference.
Some time ago, I bought the book, How to Promote Your Children’s Book: A Survival Guide for Published Writers, by Evelyn Gallardo. It offers excellent tips on self promoting your book.


On the topic of Websites, I came across an interesting article, “Update That Website,” on publishersweekly.com written by Barbara Vey. It mentions the importance of websites and blogs for authors and why they should be updated regularly.
“Never try to chase trends. Write what you love, and write the best book you can, and worry about publication later.” – Writer’s Digest Weekly Planner
Posted by Lupe Ruiz-Flores at 8:57 PM No comments:

﻿﻿﻿﻿ ﻿﻿
The other day I was watching a travel show on TV which triggered memories of when I lived in Southeast Asia. Years ago, I lived in Bangkok, Thailand. I remember the day I arrived. The first thing I saw was a water buffalo hitched to a plow out in the lush countryside. The few houses scattered around were built on stilts. I knew then this was going to be quite an adventure.
﻿﻿﻿﻿ ﻿ ﻿
We lived right in the city and every morning I watched from my balcony as Buddhist monks in flowing orange robes walked by stopping by the roadside to accept small bowls of rice offered by the faithful who came out to greet them each day. Images of magnificent pagodas (temples) around the city also come to mind. I remember the exotic floating markets (boats) with colorful wares of flowers, fruits, and vegetables streaming down the river. I remember being high up atop an elephant and its rough skin rubbing against my leg as my children and I rode on it. Then there were the giant geckos (lizards) that came out at night from the canal behind our house. They would adhere themselves to the outside surface of the windows scaring us to death.
Quite an adventure living in Thailand. I recently wrote a children’s story about a Thai elephant who yearns to be part of the royal court in the king’s palace but is constantly rejected. I will be sending it out soon. Wish me luck!
“Don’t hesitate to use a big word in a children’s story if you think it’s the best word – as long as young readers can ascertain the meaning through the context of the story.” – Writer’s Digest Weekly Planner

Posted by Lupe Ruiz-Flores at 11:06 AM No comments:

Hope you’re having a super new start on this first day of 2011! I started a new journal, a splendid one with a beautiful leather cover. It’s got inspirational quotes on each page. I already jotted down my writing goals for 2011. Speaking of goals, I came across a blog article, “Wishing Up Good Goals” by Jan Fields of Institute of Children’s Literature, which mentions goals versus wishes.
She writes about the difference between the two. “Many of us set goals for the year that sound like this: sell two stories a month or get book contract or get more respect for my writing from my family. Those are great things to hope for, but they depend upon someone other than you. Therefore, they aren't goals, they're wishes or hopes.”  Visit her link for more on this topic.
I took my own advice for one of my goals: nurture your creative side. I went to the McNay Art Museum in town and had a wonderful day viewing the magnificent art. The grounds are beautiful as well. I hope to do this more often. It’s good for the soul.
﻿﻿ ﻿
A journal can be an invaluable tool for recording ideas, impressions, and anecdotes for future use. It can also help your career by instilling in you the habit of writing regularly. -- Writer's Digest Weekly Planner
Posted by Lupe Ruiz-Flores at 5:19 PM No comments: