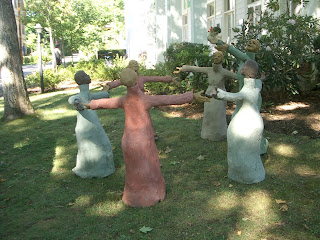 I like to watch Book-TV on C-SPAN 2 when they have segments on authors and their writing habits. I just finished watching author and historian, James McPherson, whose book, Battle Cry of Freedom, won him the Pulitzer Prize. He’s written tons of other books as well. He had some interesting things to say. First of all, I found it fascinating that he stills prefers to type his longer pieces on an Olympia electric typewriter. He likes the “rhythm of the typewriter,” he said. He talked about the beginning of a story, which of course we call the “hook.” He said it’s what “draws in the reader but is also the most difficult to write.” I hear you, Mr. McPherson.
He said he thinks about the opening quite a bit before he sits down to write and then spoke about the writing process. “The actual formulation of the sentence is something I do as I’m thinking about it. Sometimes I start a sentence not knowing how it’s going to end. But the actual process of putting down the first clause or first words of the sentence … something clicks in my head and I think this is the right way to do it.”
He went on to say that “writing begets more writing.” He mentioned that it’s “probably true of most writers that writing helps to clarify their thinking and that thinking then leads to clarification of the next sentence or paragraph they want to do.”
I’m not comparing myself to Mr. McPherson, but I find that to be true in my own writing. Today I spent a few hours on my work-in-progress piece. I found that in some instances putting down first words in a sentence where I had no idea where it would lead just naturally led to more writing. After a while, the writing seemed to flow. Once I revise, I’ll keep some sentences in and cut others out. But the important thing is that I was writing.
"The writer must write what he has to say, not speak it." -- Ernest Hemingway
Posted by Lupe Ruiz-Flores at 10:04 PM