I feel compelled to brag about this author, Ruta Sepetys, because I met her last summer at the SCBWI-LA conference. We talked for a bit and I bought her book, Between Shades of Gray, and she graciously autographed it. She told me she was one of the “success” stories of SCBWI. Seems she met her agent at one of these annual conferences, and the rest is history. I really enjoyed reading her book and now I see her name all over the place. She’s featured in the December 1, 2011, Publishers Weekly Children’s Bookshelf online newsletter. I am so proud to have met her. I wish her the best of success with her book and the next two that are coming out. I can say, “I knew her when.” 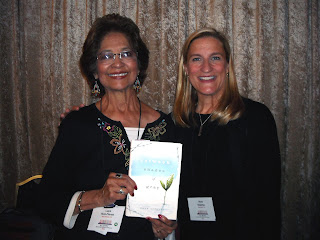 
The French literary magazine LIRE has selected Ruta Sepetys's Between Shades of Gray as "Ce qu'ils n'ont pas pu nous prendre"— Best Novel for Young People 2011. It is the first time the prestigious French prize has been awarded to an American in the children's category. Between Shades of Gray, published here by Philomel and in France by Gallimard Jeunesse, tells the story of Stalin's deportations of Lithuanians to Siberia. Sepetys, the daughter of a Lithuanian refugee, told PW in an interview that she was compelled to tell the story after a visit to family in Lithuania in 2005, during which she learned about her own grandfather's story of Siberian deportation and his eventual emigration to America.”
"If a book looks like you worked too hard on it -- go back and work on it some more." -- Betsy Byars
Posted by Lupe Ruiz-Flores at 4:59 PM